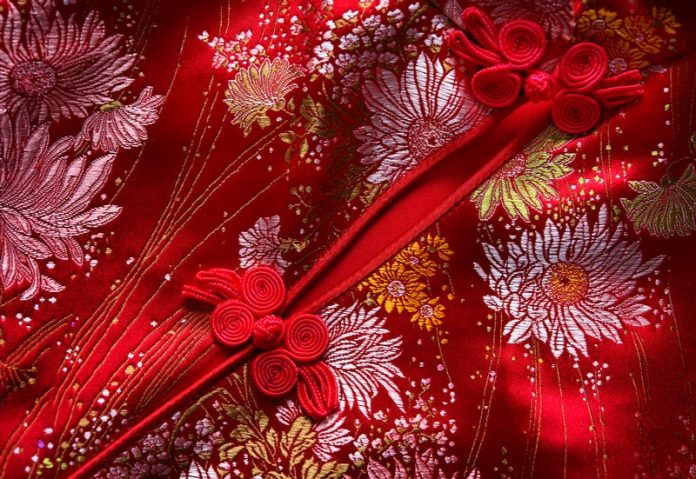 In addition to its well-known gastronomy which has become so popular all over the world, Chinese clothing is another tradition that has managed to travel beyond national borders, thanks to its elegance and special designs. Discover here all their history and their characteristics!

The history of Chinese clothing

Originally, Chinese clothing consisted only of a piece of silk that adorned with a drawstring at the neck and sleeves. Despite its simplicity of manufacture, it quickly became, for its comfort and elegance, the garment of choice for Chinese dynasties, as well as other members of the upper echelons.

However, throughout its history, Chinese clothing has evolved and given birth to new models according to the dynasties. Likewise, during the rise of the Communist Party in China, the use of specific costumes for the bourgeoisie was prohibited. Instead, the Maoist costume was worn, which didn’t differentiate between social classes and genders.

Over the years, new cuts have aimed at highlighting the female figure. Its success was such that in a short time it became a traditional symbol in the culture. The turtleneck and shorter sleeves had been incorporated and represented a rapprochement with Western culture.

Although, as we said, Chinese clothing has undergone continuous evolution to adapt to modern times, three models can be differentiated. These have specific characteristics and uses.

Created in the Qing Dynasty between the 17th and 20th centuries, it was the main garment of the Manchu ethnic group. That is why it should be worn by both women and men. Although its use has spread, it has gradually become the characteristic Chinese dress for women. After the end of this dynasty in 1912, the use of clothing continued.

As for the characteristics of this Chinese garment, it is a straight and loose suit with long sleeves that goes down to the feet. It made from natural silk and had cuts on each side, as well as distinctive embellishments on the neck.

With its modernization in the 20th century, the qipao, also known as cheongsam, has become tighter, and there are even knee-high and strappy models. When worn on informal occasions, the materials used are velvet and wool.

The Hanfu is another of the Chinese clothing patterns and which began to be used during the Han Dynasty, around the third century BC Its use continued throughout history, until that the Qing dynasty ends up banning its use. One of the highlights is that it served as an influence on Japanese kimonos.

It has two parts: a tunic that goes up to the knee called Yi, and a narrow skirt which reaches to the ankles and called chang Its also distinguished by the width of its sleeves.

In the case of women, these Chinese clothes are accompanied by ornaments in the hair, and for men with different types of hats. The zhongyi is the white costume that was worn under the hanfu. Nowadays it is one of the most used in religious ceremonies and historical reenactments. In addition, it has inspired other more modern fashion designs.

The third type of Chinese clothing costume is the Changsha, which introduced at the end of the Qing Dynasty. Its designed in different colors and consists of pants and a jacket called tangzhuang. Today its used for important celebrations, such as weddings or the New Year, as well as for funerals in the case of men.

In addition to the Chinese clothes just described, pien-fu and shenyi were also popular. The first was the ceremonial garment of the Han Dynasty and consisted of a knee-length tunic and ankle-length skirt or pants. It also came with a hat and a wide ribbon at the waist, the latter being optional.

The Shenyi was the Chinese dress of the Ming Dynasty, between the 14th and 17th centuries. It made with an Asian plant, the ramie, and highlighted the waistband and the width of the sleeves. The upper part made up of four sides corresponding to the seasons, and twelve sides in the lower part, for the months of the year.

If you want to know more about Chinese clothes, as well as the ancient traditions of the country do not let the opportunity pass!